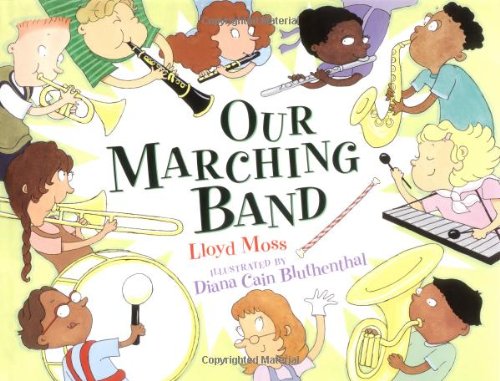 Moss's () occasionally strained yet spirited rhyming narrative introduces 10 youngsters, most with alliterative monikers (Belinda Blore, Calvin Crum, Mel Mackelroy, etc.), who aspire to play different instruments. Practicing at their open windows in neighboring houses, the kids create quite the cacophonous clamor: "Throughout the start, each person's part/ Just didn't sound too good;/ The girls and boys produced a noise/ That stunned the neighborhood." But practice makes nearly perfect, and the mayor proclaims them a "dandy band." The mayor's words, in fact, demonstrate the unevenness of Morse's verse, which intermittently scrambles tenses and stumbles rhythmically (e.g., "It's my intent they'll represent/ The town, and I will try/ To see they've played our big parade/ The next Fourth of July!"). Bluthenthal's () cheerful, detailed cartoon art conveys the spunk of the young musicians and the townsfolk's evolving reaction to their music-making, as dismay at the kids' beginning efforts turns to jubilation during their polished performance in the parade. Given the characters' energy and enthusiasm, young readers are likely to turn a deaf ear to any of the book's discordant notes. Ages 4-8. ()