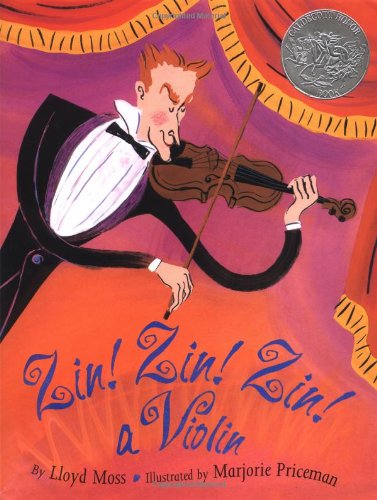 This debut book by author Moss,

As kids today would say is boss.

(In language that is never dense)

A helpful intro to each orchestra instrument -

How some are alike, but rather more are different.

He starts with the trombone's ""mournful moan,""

Then adds a trumpet, French horn and cello-

All sounding forth a signature ""hello.""

Each musical portrait (in quatrains) abounds

Around each spread in garb bizarre-

As if proving how funky musicians are.

With every new instrument joining the throng

Moss incorporates numbers and stops only when

His team finally reaches a ""chamber group of ten.""

So the book can be used as a counting tool

(A great way to perk up a dull day at school):

But it really works best, it's easy to see,

As a deft means of meeting the symphony.

So plentiful praise to this finely matched pair,