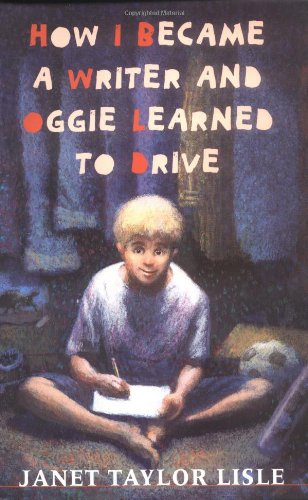 HOW I BECAME A WRITER AND OGGIE LEARNED TO DRIVE

To distract his younger brother, Oggie, from the trauma of their parents' separation and imminent divorce, 11-year-old Archie starts inventing a story about the "Mysterious Mole People," an underground network of people who were "normal humans once" but developed thick fur and claws. They attempt to save civilization by sucking bad guys into the earth. While Archie creates exciting escapades in his mind, his own life takes an adventurous turn. First, he single-handedly thwarts a hold-up attempt at a convenience store; then a gang of hoodlums (who witness the robbery attempt) hire Archie to make some deliveries. Connections between the Mole-People story and Archie's entanglement with the gang seem sometimes forced and other times vague, and occasionally the logic in the "real" plot goes haywire (e.g.: Why doesn't Archie just recover Oggie's stolen wallet from the gang instead of running errands for them?). The magical meshing of fantasy and reality found in Lisle's previous novels (; ) is sadly absent here. The author clunkily makes a point of distinguishing fact from fiction, stressing how six-year-old Oggie enjoys imagining the Mole People's world without believing in it. "He knew the Mysterious Mole People weren't really there, living underground, slurping bad guys." Archie and his brother may be admired for their courage to "fight back," but ultimately they get lost in the tug-of-war between the story lines. Ages 9-12.