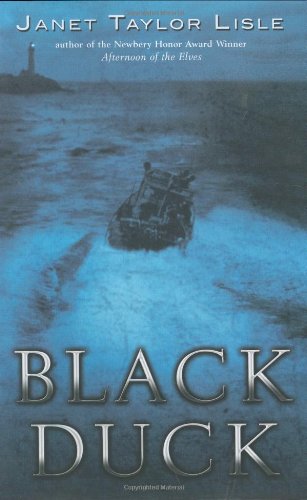 The title of Lisle's ( ) suspenseful novel refers to a rumrunner—one of the boats used during Prohibition to smuggle outlawed liquor into the U.S. Readers will likely look past the awkward frame story—a contemporary student interviews Ruben Hart, who was a child during Prohibition—as they sink deeper into Ruben's story. In the spring of 1929, while Ruben and his friend Jeddy look for lobster pots, they come across a man's body washed up on the beach, elegantly dressed, with a bullet hole through his neck. They go back to report it, but when the police arrive, the body has vanished. The situation grows complicated: Jeddy's father is chief of police, Ruben's father works for general store owner Mr. Riley, whom Ruben suspects may be involved in the bootlegging, and an old fisherman living in a seaside shack is roughed up as some men come looking for a mysterious "ticket." Much is at stake, as many locals supplement their livelihood by unloading the rumrunners, and townsfolk suspect there is a traitor in their midst. This is a gripping tale of families and friendships stretched to the breaking point as the community around Rhode Island's Narragansett Bay is caught in the escalating conflict between rival gangs. Faux reproductions of period articles anchor the narrative and move the story along. Even though readers know from the get-go that the will come to no good, they will eagerly turn the pages to find out how. Ages 10-up.