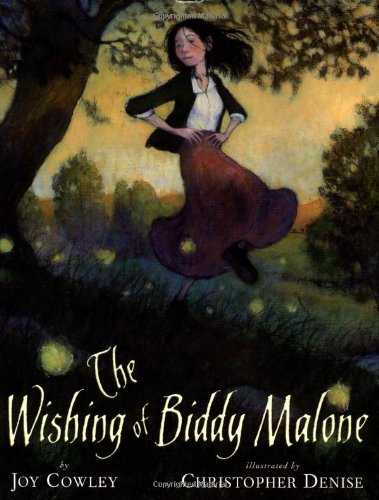 THE WISHING OF BIDDY MALONE

A girl in Old Ireland discovers that faerie magic isn't quite what it appears in this complex and uneven tale. Biddy Malone loves to sing and dance, but possesses true talent in neither pursuit. Her frustration—and her brothers' frequent teasing—set Biddy's fierce temper to boiling. In the throes of a tantrum, Biddy storms off and soon finds herself in a faerie village. Amidst an evening's merriment, a handsome faerie boy (a "loveling") asks Biddy to name her three fondest wishes, which she gladly does (she wants to dance, sing and conquer her temper). But once Biddy's back at home—where in human-time she's been missing so long as to have been presumed dead—she realizes that she must work to make her wishes come true. Although Cowley ( ) grabs onto traditional elements of Irish folklore with gusto, her story strains to convey the lesson Biddy learns: "Something gained for nothing has no value." The ending, while romantic, may be perplexing to young readers: Biddy appears to turn her back on her family and human ways to live her life with the faeries. Denise ( ) harnesses firefly flashes of other-worldliness in his glowing, truly enchanting faerie scenes, with much to reward close scrutiny (e.g., a pair of ladybugs doing a jig). His acrylics feature gauzy lines, antiqued patinas and cozy details—all of which convey a sense of rustic realism when Biddy's amongst her kin. Ages 4-8.