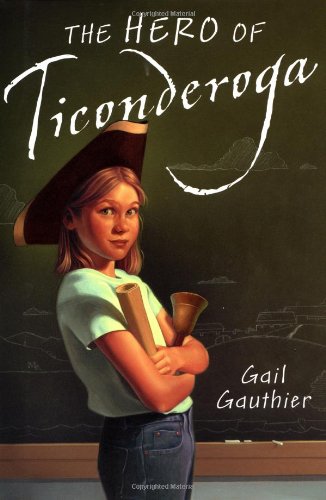 THE HERO OF TICONDEROGA

Like Ethan Allen, the subject of her oral school report, the narrator of Gauthier's () amusing and affecting novel, set in 1966 Vermont, is sassy, shrewd and outspoken. Tessy's voice crackles with razor-sharp insight and comedic one-liners from the very start, as she tries to decide where to begin her story. When her humorless sixth-grade teacher takes a leave of absence, the substitute scraps the longstanding plan to award the most coveted oral report subject—Ethan Allen—to the best student in class and instead picks a name randomly. A mediocre student at best, Tessy unwittingly lands the plum assignment. After an initial presentation in which she reports on only several saucy anecdotes from Allen's life, she delivers in installments a detailed chronicle of the life of this pugnacious Revolutionary leader who was instrumental in the founding of Vermont. In between these diverting passages, which balance Tessy's refreshingly quirky interpretation of history with Allen's own words, the girl grapples with some credible issues, among them her embarrassment by her simple, big-hearted parents, who are farmers of French Canadian descent, and her relationship with a stuffy, wealthy classmate. Gauthier sustains her tale's rapid pace and surefire humor throughout, while delivering a history lesson that readers will absorb effortlessly. Ages 10-up. (.)