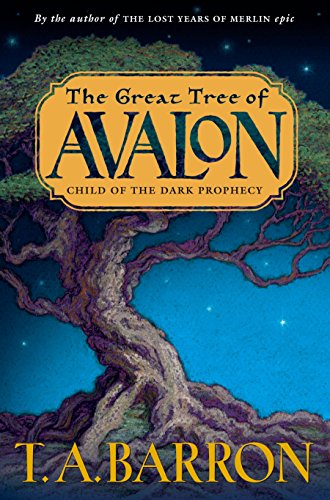 THE GREAT TREE OF AVALON: Child of the Dark Prophecy

Barron's ( ) new entry in his Arthurian mythos explores the legend of Avalon, "the Great Tree [that] stands as a bridge between Earth and heaven, mortal and immortal." The opening scene lays out the novel's central conflict: a pair of kidnappers attempt to take from its branches "an eagleboy," who in the process becomes orphaned; ensuing events lead Merlin to come to the rescue of the eagleboy as well as a human child and its mother. The magician makes veiled mention of a Dark Prophecy and asks the woman to raise the orphan, Scree, alongside her own son, Tamwyn (meaning "Dark Flame"). In the next chapter, 17 years later, the mother is dead, and the boys, separated, search for each other. The author then introduces Elli, also an orphan, who becomes apprenticed to an arrogant priestess deemed "The Chosen One" for her visions of the Lady of the Lake. Readers meet Elli just as the Dark Prophecy is beginning to come true, and Elli must help the priestess find Merlin's true heir in order to save Avalon before the foretold enemy destroys it. At times the narrative repeats itself, in order to telegraph to readers vital information. But the thickening plot and the three key characters—Tamwyn, Scree and Elli—as well as a captivating supporting cast of sprites, fairies and assorted changelings will keep the pages turning. Arthuriana fans will also delight in Barron's bonus revelations, as he ties in identities of the Lady of the Lake and others with Avalon's history. An epilogue hints at a sequel. Ages 10-up.