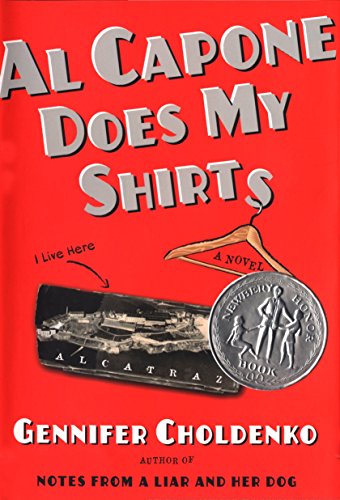 AL CAPONE DOES MY SHIRTS

Set on Alcatraz Island in 1935, Choldenko's ( ) exceptionally atmospheric novel has equally unusual characters and plot lines. Twelve-year-old narrator Moose Flanagan has just moved to the island, where his father has been hired as an electrician and guard. At first Moose is spooked at being in such close proximity to the nation's most notorious criminals, and he doesn't know what to make of the all-powerful warden's bossy daughter, Piper, who flouts her father's rule about talking about the convicts ("You say [Al Capone's] name and hordes of reporters come crawling out of the woodwork ready to write stories full of foolish lies," the warden explains). At school, on the mainland, Piper hatches a scheme to make money from classmates ("Once in a lifetime opportunity! Get your clothes laundered by Al Capone and other world-famous public enemies!... Only costs 5 cents") and forces Moose to help her. Moose has reasons for staying on Piper's good side: his older sister, Natalie, has what would now be called autism, and Moose worries that her behavior will land the family in trouble with the warden. (Natalie's condition is so poorly understood that an expert tells her desperate mother, "An interesting case... you should consider donating her brain to science when she dies.") Choldenko captures the tense, nuanced family dynamics touched off by Natalie's disability as skillfully as she handles the mystique of Alcatraz and the exchanges between Moose and his friends. Fast-paced and memorable. Ages 10-up.