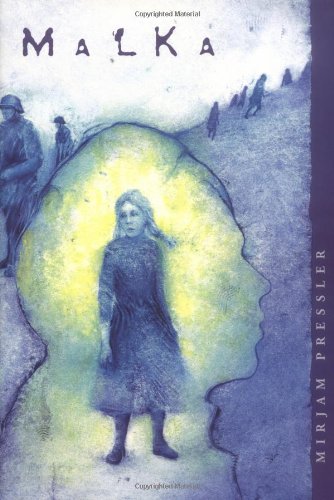 Mirjam Pressler, Author , trans. from the German by Brian Murdo

Pressler (; ) does not flinch from acutely painful subject matter; this fact-based novel, however, is extraordinarily painful even for her. Covering the period from September 1943 to March 1944, the novel opens in a Polish village. Seven-year-old Malka plays at the home of the German officer's family next door while her doctor mother, Hannah, receives warnings that the Germans are about to mount an "operation" against the Jews; Hannah then improvises an escape route to Hungary. Alternating between Hannah's and Malka's perspectives, Pressler describes a terrible predicament: just as Hannah, Malka and Malka's teenage sister, Minna, are about to enter Hungary, Malka becomes too ill to travel any further. Hannah yields to external pressure and leaves Malka with a family who promises to bring her to safety, then shepherds Minna across the border. The plan does not work, and months pass before Malka and Hannah are reunited, at the novel's end. The author inhabits both characters with harrowing authenticity and an informed imagination: readers see Malka as she navigates ghettos, round-ups and temporary homes, all the while insulating herself from the unbearable memory of her mother. Guilt consumes Hannah even as she copes with treacherous conditions in Hungary. Given the emphasis on the mother's conflicts, adults may be more receptive than teens, but whatever they take from it, readers will not emerge from this novel unscathed. Ages 12-up.