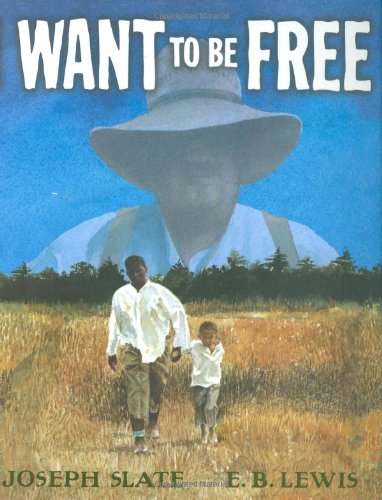 I Want to Be Free

Transposing a Buddhist story he encountered in Rudyard Kipling's , Slate (the Miss Bindergarten series) moves the setting to the antebellum South and casts as speaker an escaping slave who rescues an orphaned, ill slave child. Forced into rhymed couplets, the language strains between the demands of the rhythm and dialect—when the slave reaches “the camp of gone-free men,” they advise him to abandon a child he hears “cryin,'” saying, “Let the Big Man come. Take him back./ He has the farm. Food we lack.” For this scene, Lewis ( ) contributes extraordinarily accomplished watercolors: the scrim of night lets through the escaped men's white shirts, a hint of their profiles, the sick child's face. A religious denouement is portentous without being satisfying. Safely in “the Land of the Free,” the child touches the shackle on the speaker's leg that no one else has been able to remove, and “It fell away.” In the most sentimental of his paintings, Lewis ( ) pictures a single tear on the man's face: “How, dear child, did you set me free?”—“I'm from the Lord. You cared for me.” Ages 6–8.