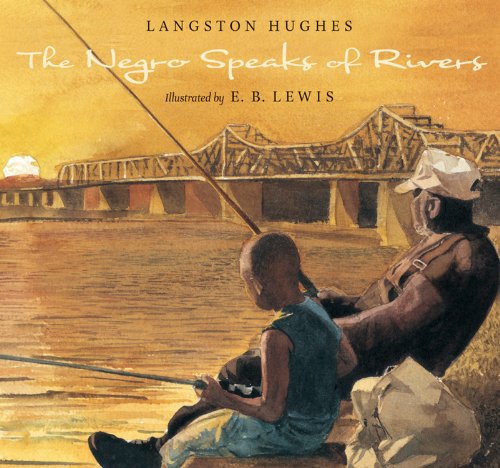 The Negro Speaks of Rivers

“I’ve known rivers:/ I’ve known rivers ancient as the world,” Hughes’s poem begins; like the poem, Lewis’s radiant watercolors convey great depth. Rivers all over the world—the Congo, the Euphrates, the Nile, the Mississippi—become the stage for portraying the experiences of black people throughout history. As an endnote explains, the artist includes a self-portrait as well, for the line “My soul has grown deep like the rivers.” A particularly striking work, it depicts a man in prayer, his face in shadow as he bows his head over his joined hands; a shaft of sunlight stripes the man’s forehead and shoulders while his upper body reflects the colors of all the rivers in the book—a figurative expression of Hughes’s conceit that people have drawn strength from life-giving waters. Other paintings are more realistic, e.g., a parent and child asleep in a hammock outside their hut near the Congo. The interplay of light, water and color unites the compositions artistically, creating a book as eloquent as the text at its foundation. Ages 4–8.