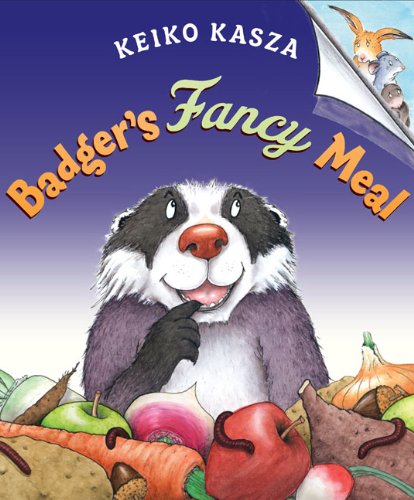 Kasza’s (The Dog Who Cried Wolf) wittily ironic tale introduces a peckish critter who, viewing the cache of food in his den, wryly observes, “Apples, worms and roots... same old, same old,” and longs for “a fancy meal for a change.” After abandoning his underground digs to search for tastier treats, Badger spies a mole. He envisions the small animal wedged in a taco shell, accompanied by a bowl of salsa, and declares, “Now, that’s what I call a fancy meal!” But the fast-moving mole dives into a hole, “a perfect place to hide.” Similarly, a rat that Badger imagines nestled on a hamburger bun “smothered in cheese sauce” and a rabbit he visualizes as the centerpiece in a banana split also escape down the hole. In an effective visual twist, each of Badger’s prey is pictured disappearing into Badger’s den and feasting on his scorned victuals on pages that appear to curl at the corner, creating comic split-action scenarios. This well-crafted device also reveals the three sated creatures exiting Badger’s hole as he hurtles through the air toward it (having just been kicked by a horse outraged by Badger’s statement that he is hungry enough to eat one). The humiliated—but still ravenous—Badger finds a note from his visitors, thanking him for the fancy meal and signed with three tiny paw prints. Kasza’s perky narrative and cleverly designed gouaches entertain while delivering a worthy message about being grateful for what one has. Ages 4-up. (May)