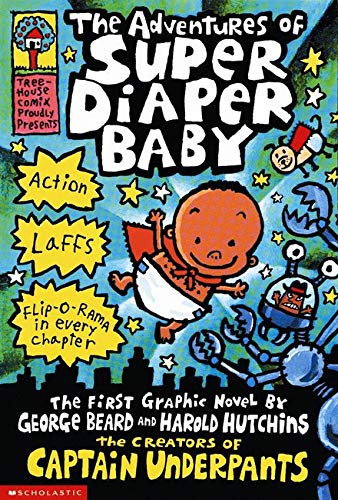 THE ADVENTURES OF SUPER DIAPER BABY

When the principal discovers incorrigible fourth graders George and Harold in the gym, running over ketchup packets with their skateboards, he punishes them with the assignment of writing a 100-page essay on good citizenship and cautions them against turning in another comic book about Captain Underpants. No problemo for this creative duo, who instead invent another—slightly younger—"super hero." The madcap misadventures of this diapered daredevil possess all the kid-tickling silliness that fans of his underwear-clad predecessor apparently can't get enough of—plus ample doses of bathroom humor. When the doctor gives him "the spank of life" at birth, he slaps the newborn too hard and the infant goes flying out the hospital window, landing in a container of "super power juice" that evil Deputy Dangerous has zapped from Captain Underpants. Then, trying to retrieve the powers from Baby, the villain inadvertently turns himself into the "piece of poo" that was in the young hero's diaper. "Deputy Doo-Doo" then seeks revenge—alas, to no avail, since in the end, his once-loyal pooch and Baby wrap him up mummy-like in (what else?) toilet paper. Visually similar to the Captain Underpants capers, Pilkey's latest is replete with misspellings, pleasingly bad puns and the "flip-o-rama" feature that slips some rudimentary animation into these preposterously good-humored pages. Novice graphic-novel creators will appreciate a concluding "How 2 Draw" section. Ages 7-10.