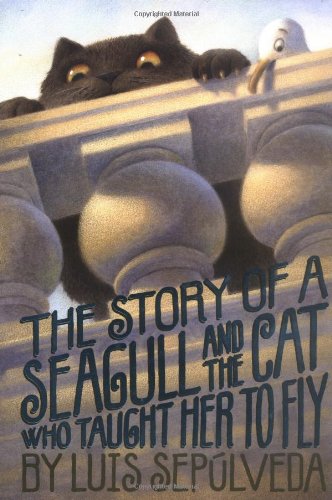 "Humans, unfortunately, are unpredictable. Often it's with the best intentions that they cause the greatest damage." So says the wise cat, Colonel, in Sepúlveda's charming tale of devotion, courage and the importance of keeping one's word. A man-made disaster indeed gets the story started: a female gull becomes mired in an enormous oil slick and expends all of her remaining energy in a final flight to safety. She lands on the balcony of an apartment building, where she meets the fat black cat Zorba and extracts a threefold promise from him: that he will not eat the egg she is about to lay, that he will look after it and, once it is hatched, that he will teach the fledgling how to fly. Zorba enlists the help of his good and noble friends ("He gave his word of honor, and the word of one cat of the port is the word of all the cats of the port," says Colonel). Each is endearing and distinctive, from the sage but stammering Colonel to the hilariously forthright Secretario to the encyclopedia-consulting Einstein. With shades of the friendship between a spider named Charlotte and a pig named Wilbur, the relationship between Zorba and Lucky (the name the feline gives the baby gull) explores fundamental questions of life and death, and following one's calling. Sepúlveda also fills the brief chapters with memorable everyday moments: the busy Italian restaurant that serves the cats around the back (but only with a reservation), the catalogue of wonders cached in the house of Harry, a human friend to the cats. The language throughout, translated by Peden, is a marvel of economy and warmth, and Sheban's delicate charcoal and pastel illustrations heighten the sense of magic (particularly a wordless spread of Lucky taking flight over Hamburg by night). Readers will hope for the further adventures of these two unlikely friends. Ages 8-12.