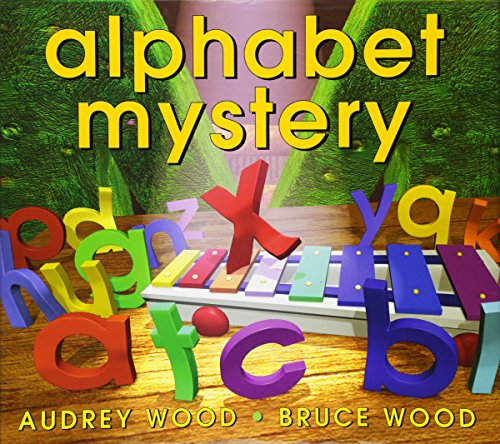 In this follow-up to , mother and son Woods again unleash young Charley's set of three-dimensional, lower-case letters on what is best described as a why-dunit. When the alphabet takes nightly roll call, something isn't right. Little is missing, and the other 25 letters set off to track him down. They find him at the spooky castle of the ominously green Giant (for Master) and discover that their comrade has become a captive but willing court musician ("tap-dancing a lullaby on a xylophone"). "I ran away because Charley never uses me," Little whines. But when Little (whose missing dot was the subject of the previous volume) explains Charley's plans for Little in his mother's birthday surprise, the errant letter agrees to escape—a plan that turns out to be unnecessary, since the hulking is really a big softie. Once again, Bruce Wood's super-saturated, digital pictures bubble with a playfully surreal sense of scale, volume and detailing, as he first shows the alphabet quaking in the shadow of , then the Giant blubbering—"I have a mother too"—as teardrops splash on the letters' surface. Whether the abecadarian cast is sailing to and from the castle on their pencil rocket, or picking out a present for Charley's mother from Giant 's treasure room (Little picks a fan, Little picks a necklace, etc.), every spread is letter-perfect. Ages 3-up.