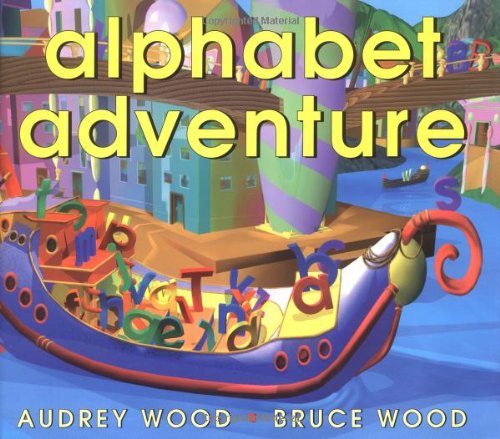 The mother-son team behind presents 26 bold, athletic-looking lower-case letters called "Charley's Alphabet" in this unorthodox ABC. After working hard all summer with their teacher, "Capital T," they are on their way to the first day of school. But they're held up when the letter loses her dot. Audrey Wood's () straightforward text and quirky premise keep the story moving apace: "Hurry! School begins soon. We must find her dot, or we'll be late!" says Capital T. The letters come up with a plan, and race around to find a substitute for Little to wear— offers a star, a heart—but at the last moment the mischievous dot returns (anxious about being replaced). Observant youngsters will note the dot's various hiding places in previous illustrations. Bruce Wood endows the crayon-colored alphabet letters with personality through their posture and actions, and places them in a hyper-realistic, computer-generated resort where crisp-edged gondolas glide through canals lined with candy-striped buildings and swaying palm trees. The horizontal layout of the book mimics film stills: the text crawls along the bottom of tropically colored spreads like so many subtitles. The climactic scene, a shot from high in the air, shows the letters aboard a streamlined yellow pencil bound for the classroom, where youngsters finally meet young Charley. A fresh and roundly satisfying excursion for those learning their ABCs. Ages 3-up.