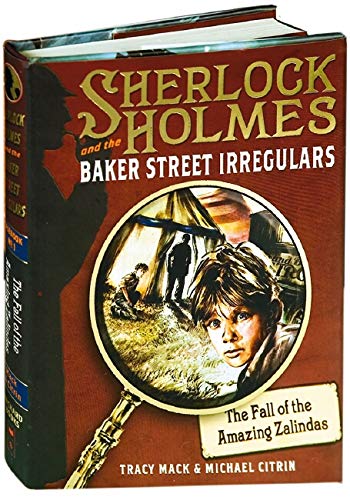 The Fall of the Amazing Zalindas

This "first casebook" in the Sherlock Holmes and the Baker Street Irregulars series puts a new twist on the success behind Scotland Yard's star detective. Readers familiar with Sherlock Holmes know that he relied on Dr. Watson, but Mack ( ) and her husband here reveal the role of the lesser-known Baker Street Irregulars, an "extremely enthusiastic and loyal gang of homeless boys." (Since Watson is the "author" of the detective's stories, the boys believe he's played down their contributions out of jealousy, and, indeed, Watson says of them: "With troops like these, we would have lost India long ago.") Led by the street-smart Wiggins and Ozzie, a scrivener's apprentice, the Irregulars investigate the link between the murders of three circus tightrope walkers (the title Zalindas) and the theft of a valuable book from Buckingham Palace. The introduction of the large cast of characters slows the pace a bit, but the authors vividly evoke the realities of 19th-century London. The Irregulars are a heartbreaking bunch, including Stitch, son of an Irish tailor whose family perished in a fire, and Rohan, whose fisherman father was lost at sea. The plotting involves red herrings and narrow escapes, and though Holmes solves the case, the boys remain at the heart of the action. The concluding "Facts and practicals for the aspiring detective" and Ruth's half-tone illustrations of the famous fellow and this motley young crew add to the elegant feel of the volume. Ages 9-12.