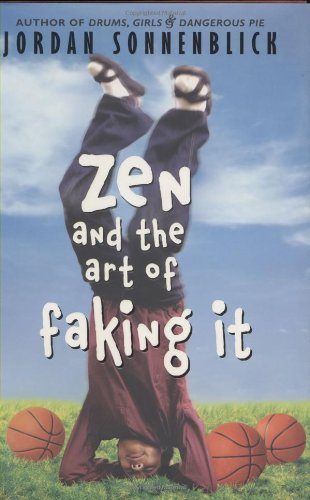 Zen and the Art of Faking It

After San Lee's adoptive father is imprisoned for fraud, the eighth-grader moves with his mother from Texas to Pennsylvania. He has moved often, each time creating new identities; this time he pretends to be a Zen master. He sits zazen on a cold rock near school each morning and says things like, “Thank you for teaching me the lesson of impermanence” (this piece of wisdom comes after a foe ruins his schoolwork). As he hopes, his “uniqueness” impresses Woody, a folk-singing girl with her own family heartache. Together, they embark on a school project about Zen, volunteer at a soup kitchen, and even devise supposedly Zen strategies to help the second-string basketball team take on the starters (this includes a practice game on roller skates). Naturally, they fall for each other, although San thinks she has a crush on a mysterious stranger. Readers will know that it is only a matter of time before San is exposed as a “fake, adopted, research-based Buddhist,” but Sonnenblick ( see Paperback Reprints) gives them plenty to laugh at (in one scene, Woody calls on insect-phobic San to remove a centipede from class because of his well-known “reverence for all living things”). Mixed in with more serious scenes (San finally writes his father a letter expressing his anger), these lighter moments take a basic message about the importance of honesty and forgiveness and treat it with panache. Ages 12-up.