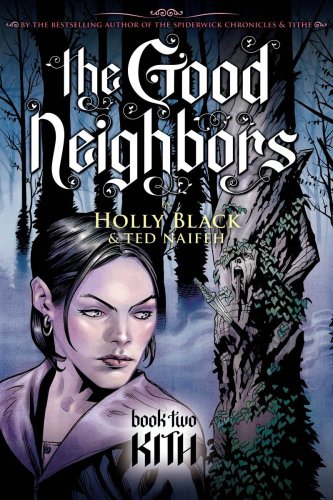 In this middle volume of a trilogy, the coauthor of The Spiderwick Chronicles considers the plight of a spectacularly alienated teenage girl. With a human father and a faery mother, Rue Silver is an alien everywhere but uncomfortably connected to both worlds. The title is ironic: the realm of the faeries may be nearby, but what those beings consider “good” might be awful for ordinary people. In this installment, Rue becomes aware that her faery grandfather plans to erect a magical barrier that will cut off the city where she lives from the outside world; then the buildings will be covered with beautiful vines, strange creatures will roam the streets, and the present inhabitants will be forced to adapt or die. Rue faces typical YA questions: how can you reconcile simultaneously hating and loving someone close to you—and what can you do if your kith and kin are committing actions that may be terribly wrong? Black's script presents this strong theme deftly, and Naifeh's b&w art differentiates the large cast well despite a natural resemblance between goth kids and faeries. Ages 12–up.