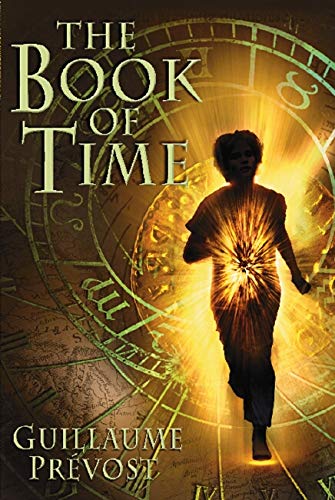 The Book of Time

This time-travel adventure by a French author reads like a book-long prelude to a much longer story, and it does, in fact, turn out to be a series opener. Fourteen-year-old Sam lives with his grandparents; since the death of his mother three years earlier, his incurably eccentric father, the owner of an antique bookstore, has gotten stranger and stranger. Prone to disappearing, he has been missing for 10 days, and Sam decides to investigate. While searching through the bookstore's basement, he finds a “totem or a voodoo object, the kind of thing you see in horror films, where a terrible curse will strike whomever discovers it” along with a “dirty coin” engraved with strange lines and symbols. Fitting the coin into the object, Sam wakes up in the era of the Vikings, just in time to save a monastery's illuminated manuscript from a raid. Subsequent adventures take him to WWI France, ancient Egypt, medieval Bruges—and give him just enough clues to point to his father's whereabouts, as a prisoner of Vlad the Impaler. Prévost sets up the various locations with lightning efficiency as Sam hurtles through one period after another; readers cannot afford to blink. This is a souped-up, older relative of the Magic Tree House books; kids who liked that brand of history and adventure but have outgrown the format will welcome the more sophisticated presentation here. Ages 9-12.