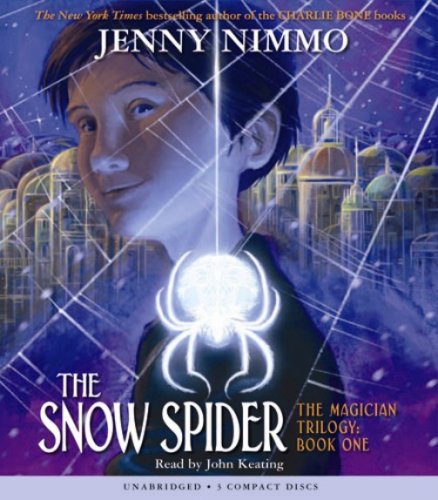 The Snow Spider: The Magician Trilogy: Book One

There is nothing like a hearty brogue to drop a listener into a faraway land, in this case Wales in olden times. Keating's wonderfully rich voice does just that. Though this first volume of a trilogy takes place in present-day Wales, the past is alive, especially when nine-year-old Gwyn realizes that he may have the powers of his namesake, a magician from centuries ago. At the center of this adventure, Gwyn sets out on a journey to find his sister, who disappeared on a nearby mountain, without a trace, on the day Gwyn turned five. Keating's reading of the tale is flawless. He easily ranges from the boy's excitement and anticipation to the wavery voice of his eccentric grandmother, Nain. It is Nain who gives Gwyn five gifts for his ninth birthday, each a small object that he must "give to the wind" in order to receive strange and magical things in return. The first and most helpful is the snow spider, Arianwen, who spins webs that allow Gywn to peer into other worlds. Keating spins the tale in a similar way; his mastery may well convince readers that this fictional world is real. Ages 9-up.