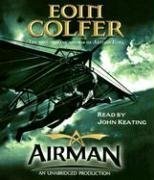 Colfer's ( ) epic adventure story is winningly voiced by Keating, whose distinctive brogue transports listeners to the remote Saltee Islands, off the Irish coast. The narrative begins with hero Conor Broekhart's birth in a hot-air balloon over the 1878 Paris World Fair, showcasing Keating's talent with a French accent, too, as he smoothly slips into the role of Victor Vigny, the aeronautic enthusiast who later becomes Conor's beloved tutor in fencing, fighting and, most importantly, the science of flight. The story turns on Conor's clash with Hugo Bonvilain, the Machiavellian leader of the island kingdom's armed guard, and Keating's sneering characterization gives the villain real menace. Two Americans also feature in the story, and Keating's only bobble here is that these two voices occasionally sound a bit similar, but this is merely a quibble in an otherwise masterly reading of a gripping tale. Ages 10-up.