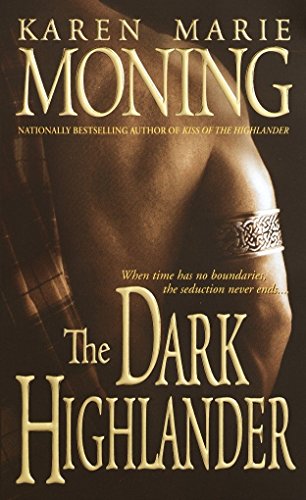 Darker, sexier and more serious than Moning's previous time-travel romances, this tall tale is every bit as entertaining. A Highlander from the 16th-century versed in both ancient Druid magic and the many ways in which to love a woman, Daegus MacKeltar is an enchanting hero as well as his own worst enemy. At the end of Moning's previous book, , Daegus used his Druid powers to travel back in time and save his twin brother, Drustan, who would have otherwise perished in a fire, but in doing so, he released the spirits of 13 evil Druids, who now reside inside him. In his search for age-old texts that may hold the key to re-imprisoning the spirits, Daegus meets ever-curious Chloe Zanders, a Manhattan antiquities lover. When she accidentally stumbles upon his collection of "borrowed" texts, Daegus holds her captive, which leads to a number of hilarious exchanges and heady encounters. The tension, sexual and otherwise, hits a boiling point when the two travel to Scotland to face Daegus's demons. Chloe's cheery disposition is a perfect foil for Daegus's brooding sensuality, and their clever banter leavens the weighty plot line. This wild, imaginative romp takes readers on an exhilarating ride through time and space.