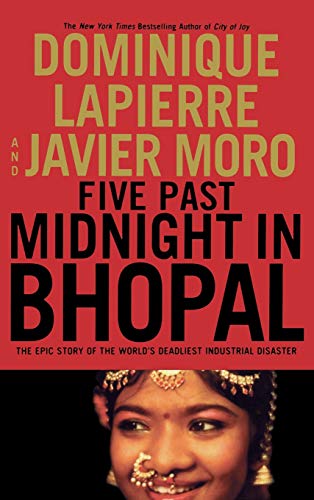 FIVE MINUTES AFTER MIDNIGHT IN BHOPAL: The Epic Story of the World's Deadliest Industrial Disaster

As with Lapierre's , this latest project, co-written with Spanish travel writer and journalist Moro (), is part historical documentation and part dramatization, a modern fable depicting the communities that weathered the effects of early globalization in India. After DDT was banned in 1973, American chemical giant Union Carbide began to push Sevin, a pesticide that calls for highly toxic and unstable ingredients in its production. They built a processing plant in Bhopal, India, where a combination of poor supervision and penny-pinching tactics eventually led to the world's worst industrial disaster: on December 3, 1984, the plant sprung a leak during routine maintenance procedures. The resulting noxious vapors killed between 16,000 and 30,000 and left 500,000 permanently injured. As Lapierre and Moro recount the disaster, they weave in the story of a family of peasants forced to leave their farmland and move to the Bhopal region, where their fate intersected tragically with that of the plant. The moral of the story is familiar (what's good for Union Carbide is not so good for the world), but it still packs a bitterly ironic punch. With their canned dialogue and patronizing tone, the close-ups of Indian life are not as effective as the authors' straightforward history of the accident. Nevertheless, the inherent drama of the story keeps the pages turning, and its lessons make the book well worth picking up.