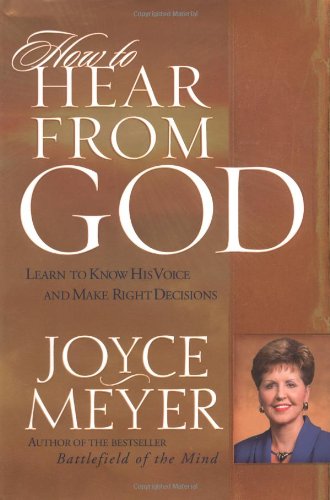 HOW TO HEAR FROM GOD: Learn to Know His Voice and Make Right Decisions

No-nonsense, best-selling author and Bible teacher Meyer explores the various modes God uses to communicate with his listening followers in this book geared for charismatic Christians. While most Christians would agree that the primary vehicle God utilizes to speak to believers is the Bible, Meyer adds several others that may raise eyebrows among conservative evangelicals. She asserts that devout Christians can and do hear from God via dreams, visions, an audible voice and what Meyer calls an "inner witness" that parallels the still, small voice mentioned in Scripture. She aims to encourage Christians to listen well, as she believes that very few followers of Christ ever fulfill God's perfect plan because they haven't perceived God's directives for their lives. Detailing various obstacles to hearing from God, Meyer candidly shares her own battles with busyness before expounding upon the dangers of rote religious activity, stubborn hard-heartedness, worldly viewpoints, unforgiveness and legalism. Finally, she offers the cure for these ills: the grace of God that brings blessed freedom and restoration. Meyer's trademark plainspoken style carries through here; as a spirit-filled spokesperson for God, she writes her words in the same style she would speak them. Some Christians may wonder about her tendency toward "verse claiming"—the many instances where she thinks God is speaking directly to her through a message or lesson given to some biblical character. However, fans of Meyer's previous works will likely be delighted with this newest offering, and its back-to-basics approach will ensure new fans as well.