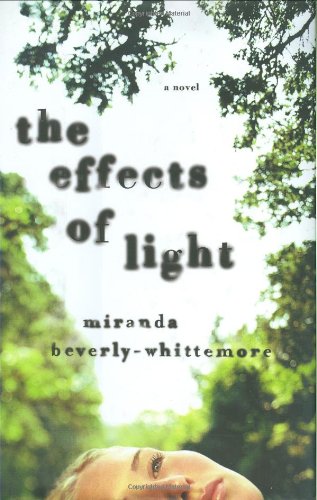 THE EFFECTS OF LIGHT

Beverly-Whittemore investigates the relationship between art and life in an engaging but uneven debut that reveals both her promise and her youth (she was born in 1976). As children, Myla Wolfe and her now deceased sister, Pru, posed for a series of provocative photographs. Because of an unnamed (but aggressively insinuated) tragedy, Myla has spent her adult life as a history professor named Kate Scott (though an unconvincing one: "So much passion over something so potentially boring: medieval research!... She felt lost in ideas"). A mysterious letter and a colleague's lecture draw her back to her hometown, where she tries to put together the puzzle of her dead father's academic work, reconnect with those she left behind, rediscover herself as Myla and forge a new love with the aforementioned colleague. Her quest is juxtaposed with the parallel narrative of the tragedy's buildup, as told by her dead sister. Beverly-Whittemore gets points for her ambitious plot, but a naïve intellectual enthusiasm overwhelms the novel, and in trying to incorporate too many heavy themes, she obscures the novel's focus: is this a mystery? an allegory? a graduate student essay? At one point, Myla recalls how her father congratulated her for refusing to learn to read yet, thus demonstrating that "she wasn't ready... to lose the big picture." Beverly-Whittemore doesn't seem ready to lose it, either—but next time, perhaps she'll exert more control over her far-reaching visions.