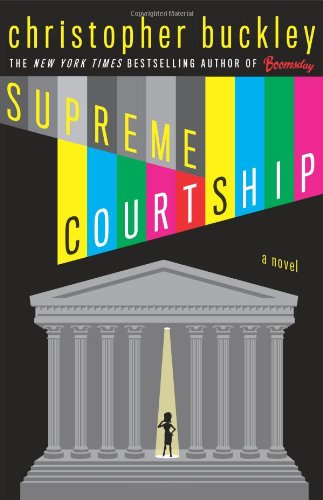 From the indefatigable Buckley comes a flabby satire about a television judge who ends up on the Supreme Court. Unpopular president Donald P. Vanderdamp nominates Pepper Cartwright after Sen. Dexter “Hang ’em High” Mitchell torpedoes his first two contenders. Once Pepper is confirmed and leaves her show, her producer (and soon-to-be ex-husband), Buddy Bixby, persuades Mitchell to leave the Senate and try his hand at acting as the star of the political drama . Vanderdamp, meanwhile, mounts a re-election bid to protest Congress’s approval of an absurd term limits amendment. He faces off against Mitchell, who ditches his role as television president to run for real president, and before you can say “Whizzer White,” it is left up to newbie Pepper and the rest of the Supremes to decide the fate of the election. Unfortunately for the reader, Pepper’s story gets lost between the jokes and the overstuffed plot (including a romance with the Chief Justice, the investigation of a leak inside the Supreme Court and a nuclear threat from China), and the satire is oddly detached from the zeitgeist.