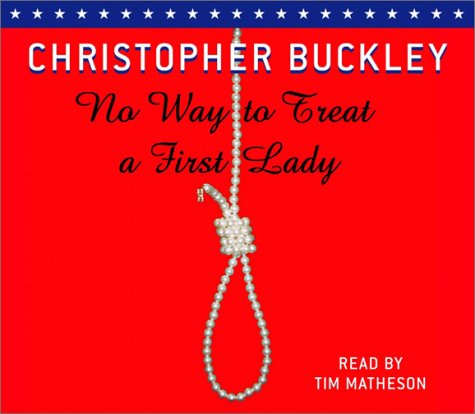 NO WAY TO TREAT A FIRST LADY

Matheson brings all the skills one would expect of an experienced actor to Buckley's latest romp. In a story that's equal parts satire and courtroom drama, Buckley () slings barbs at lawyers, politicos and Washington's social elite. After President Ken MacMann returns from a lusty night in the Lincoln Bedroom with actress Babette Van Anka, his wife, Elizabeth, hurls insults and a priceless Paul Revere spittoon at him. When MacMann is found dead the next morning with the word "Revere" embossed on his forehead, the first lady becomes the prime suspect. Buckley lays his cards openly on the table: one lawyer is nicknamed "Shameless," while another's last name is Crudman. And Matheson captures them all, whether rendering Shameless Baylor's mock indignation at being refused a preposterous motion or evoking the arrogant commentary on a show called . He also does excellent turns as the flighty, would-be Middle East peace activist Van Anka, a host of other witnesses and the no-nonsense judge who tries to keep the Trial of the Millennium in check. This may not be the year's most substantive audio, but with a plot that seems just crazy enough to be true and a crisp performance by Matheson, it never fails to entertain.