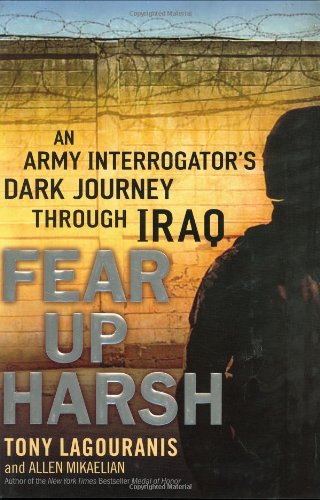 Fear Up Harsh: An Army Interrogator's Dark Journey Through Iraq

Written with bestselling military writer Allen Mikaelian, this is a developed version of a story widely available in the media and on the Internet. Lagouranis became a central figure to Iraq war opponents by describing his role as an army interrogator at Abu Ghraib and elsewhere. Official policy may have stressed observing the Geneva Conventions, but in the field and out of sight, he says, the policy rapidly became "anything goes." "Fear up harsh" in principle meant verbally intimidating a prisoner, but came to include sleep deprivation, induced hypothermia and binding, with all levels of command complicit. Convinced such methods did not work and disturbed by his own behavior, Lagouranis felt "the feeble voice of my deeply suppressed morality trying to be heard." Increasingly identifying with prisoners, he began interpreting the war as corrupting and brutalizing of the institutions and individuals involved. On returning to the U.S., Lagouranis had intensifying stress reactions that prompted him to go public about the way the war had led him to "discover and indulge my own evil." To date, his moving account has been accepted rather than investigated; readers might be cautioned to remember B.G. Burkett's (1998)—an exhaustive analysis of equally moving Vietnam accounts that turned out to be in good part constructions.