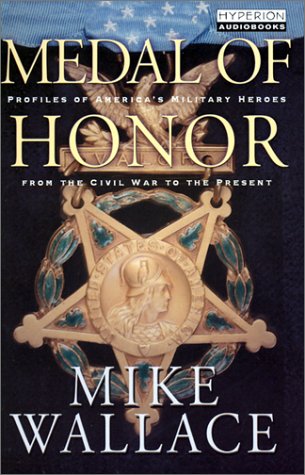 MEDAL OF HONOR: Profiles of America's Military Heroes from the Civil War to the Present

In this lively account, Mikaelian traces the history of the Medal of Honor, the highest military distinction awarded in the United States, and the lives of several of those who have earned it in the years since it was established by President Lincoln during the Civil War. He focuses not only on their heroic feats, but also on what became of them in the wake of their deeds and the honor the medal earned them. This recording is augmented by readings by Wallace, who tells of his own wartime experiences and supplies historical context with the same timbre and excellent gift for timing and dramatic buildup that many will recognize from his work on . The stories themselves are read by a rotation of three other readers, although Chase, Culp and McLarty have very similar voices and approaches. While their performances get the job done, they somewhat pale when juxtaposed with that of Wallace, and their tone and style occasionally bring to mind educational films from high school history class. The production that accompanies them is pronounced, but not over the top. It doesn't include bugle calls or the muffled clap of cavalry, but it doesn't shy away from the occasional drum roll or a few bars of "When Johnny Came Marching Home," either. Above all, though, the engrossing stories themselves will keep listeners engaged if not fascinated.