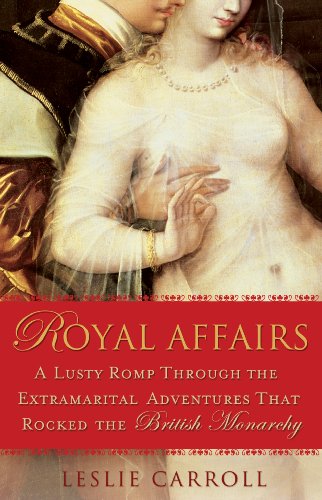 Royal Affairs: A Lusty Romp Through the Extramarital Adventures That Rocked the British Monarchy

If misery loves company, devotees of the late Princess Diana may be happy to learn that, like Prince Charles, King George I ignored his luscious wife and first cousin, Sophia Dorothea, for not one but two hideous mistresses, one of whom may have been his half-sister. Camilla, duchess of Cornwallis, had a great-grandmother, Alice Keppel, who was the mistress of Charles's great-great-grandfather Edward VII; a hysterical Alice had to be dragged away from her comatose lover's deathbed and wore full mourning to his funeral. After his wife, Eleanor of Aquitaine, bore him eight children, Henry II openly cavorted with his 16-year-old Welsh mistress, Rosamund, but the highly political Eleanor got revenge by inciting their sons to rebel against Henry and possibly poisoning Rosamund. The narrowness of Carroll's subject matter (she writes historical fiction as Amanda Elyot) is more tiresome than titillating, and her tales of such favorites as Anne Boleyn, Robert Dudley, the Earl of Essex and Wallis Simpson are less than fresh.