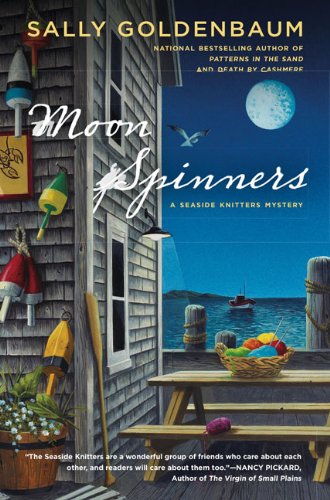 In Goldenbaum's delightful third knitting mystery (after 2009's ), Izzy Chambers, proprietor of the Seaside Knitting Studio, and assorted knitting group friends gather for dinner at the Sea Harbor Yacht Club in Sea Harbor, Mass., to celebrate fund-raising efforts for the new community center and park. Special thanks are due two local construction companies, Santos and Delaney, which have been working together despite the uneasy relationship between the two families. The sudden appearance of drunken Julianne Santos, who threatens her brother, Alphonso, with a beer bottle, interrupts the dinner. Gracie, Julianne's daughter and the estranged wife of Joey Delaney, wishes she, Gracie, could disappear like Alice down the rabbit hole. Later that night, Alphonso's aloof, beautiful Argentinean wife drives her Ferrari off a cliff. Tampered brakes signal murder. Well-drawn characters and an intriguing plot lift this well above the average cozy.