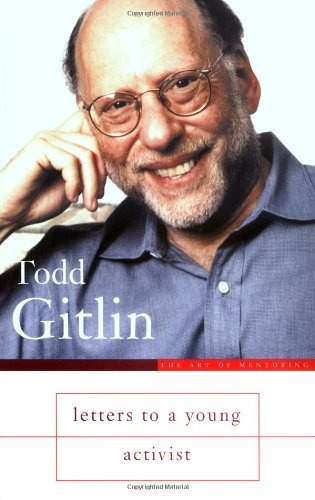 LETTERS TO A YOUNG ACTIVIST

Gitlin, a Columbia University professor of sociology and journalism, is a former president of Students for a Democratic Society, SDS, an influential radical '60s group, one of whose primary focuses was anti-Vietnam War activities. Although his stated intention is to provide a guide for future activists, Gitlin may find a more receptive audience among baby boomers who participated in the '60s antiwar protests and have struggled to extract meaning from their own history. While Gitlin tries hard to convince his target audience that he understands them and once felt as they now feel—angry, impatient, outraged and above all convinced of his own rightness—it is unclear whether they would embrace his conclusions any more than Gitlin's generation embraced the suggestions of the Old Left. Such a response might be unfortunate, as Gitlin, who writes earnestly and has a knack for aphoristic observations, has some unusual points. For example, he derides Ralph Nader's third-party run for president as "narcissism wearing a cloak of ideals." He also offers insightful observations on the need for both outsider activists and sympathetic insiders to make meaningful changes in public policy, the dangers of identity politics and the requirement that activists willingly seek and accept institutional power. He eloquently argues for the need to resist the temptation of violence. On more than one occasion, however, Gitlin's prose is abstract and convoluted, verging on the overwrought. He also sometimes loses control of his metaphors ("when guilt and rage slip their leash, they murder the future in the name of an unsalvageable past"). By and large, though, this is a generous and well-meaning book, which may interest aging activists and, perhaps, the young audience at which it is aimed.