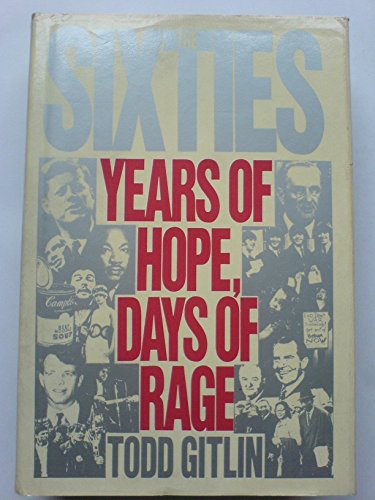 The Sixties: Years of Hope and Rage

Nobody is better equipped to write a definitive history of the extraordinary 1960s than Gitlin. An astute observer of the media (The Whole World Is Watching, Inside Prime Time and Watching Television), he was also at one time president of Students for a Democratic Society and remained prominent in their councils until the excesses of the Weathermen and the student risings that followed the 1970 killings at Kent State combined to bring the end of the New Left. In political terms, it was a period that could not be measured or evaluated by any previous American standards; and the great value of The Sixties is that Gitlin, from his thoughtful insider's position, is able to trace the ebb and flow between new radicals and old party-liners, between the hippies and such arcane groups as the Diggers and the Yippies, between those on the fringes of liberal power in Washington and members of the Student Non-Violent Coordinating Committee who worked so hard through the early part of the decade to bring civil rights to the South. No one who wants in future to write a coherent political history of that timeand there is no good reason, after The Sixties, for anyone to try for quite a whilewill be able to do without Gitlin's insights. He makes the agonized thrashings of the period understandable in terms of personal liberation, frustration, idealism and guilt about being born lucky in an unlucky world; he also manages to make it a logical sequel to the comfortable, complacent '50s. The detailed and informed political history is the core of the book, but nothing significant is missed: the music, the clothes, the obsession with drugs, the flowering of the underground press and, of course, the key moments: the assassinations, the demonstrations, the People's Park in Berkeley, the ""police riot'' at the 1968 Democratic convention in Chicago, the Weathermen Manhattan townhouse blastit's all here, and vividly recorded. And finally, as Gitlin convincingly and elegiacally shows in his concluding chapter, we are still, in many subtle ways, living the legacy of that time, however unlikely that may seem. The Sixties is a triumph of lucidly written popular history. (November)
close
Details