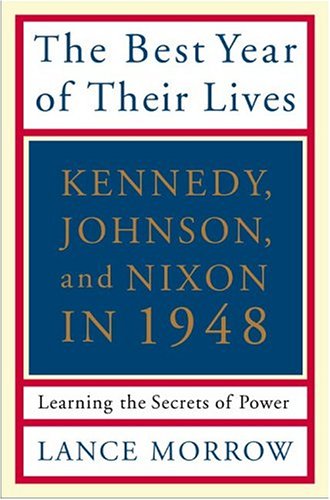 THE BEST YEAR OF THEIR LIVES: Kennedy, Johnson, and Nixon in 1948: Learning the Secrets of Power

essayist Morrow ( ) does an excellent job of showcasing three future presidents as young congressmen standing at the seductive threshold of power. Morrow also depicts the sowing of the seeds of the corruption that thrives alongside authority and success. We see L.B.J., once a starry-eyed do-gooder, making Faustian bargains in order to bootstrap himself from the House of Representatives to the Senate (he won via stuffed ballot boxes, arranged in part by segregationists whose views he devoutly, but quietly, despised). We see J.F.K., on the mend from a near-fatal bout with Addison's disease, begin tying a knot of lies about his health and private life that would be unbound only after his death. And we see the equally young Richard Nixon commence his assignations with Whittaker Chambers, the former spy who would make Nixon's reputation by testifying against Alger Hiss. At the heart of Morrow's tale lurks that most potent yet dangerous tool of public and personal politics: deceit. This is the story of the birth and nurturing of cynicism in three future political giants: Morrow sees each man as a study in moral compromise and shows us how, starting in 1948, each continually and routinely—if sometimes sadly—sacrificed ethics before the altar of ambition.