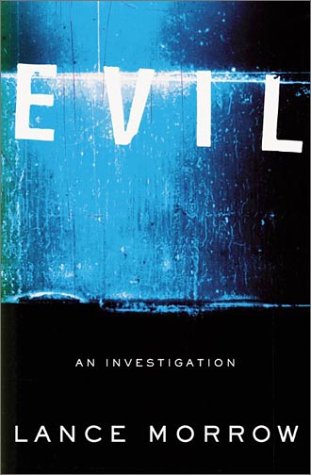 In , a memoir centering on his heart attacks, Morrow asked questions about the nature of evil as it relates to illness and death. This foray into evil generally is a thing of snippets rather than sustained case building. Morrow, author of more than 150 cover stories, begins by responding to a variety of events, some of them on the scale of the Holocaust and September 11, others more modest, such as several particularly gruesome murders and the shootings at Columbine, trying to grasp where evil inheres. He then wanders through a mass of heartfelt but turgid sentiments, from which it is possible to extract a few conclusions about his opinions: evil exists; people may be evil; deeds may be evil even when people are not; there are degrees of evil, great and small, justifiable and unjustifiable. Franz Fanon's liberation-through-violence ideology and the cult of the Marquis de Sade are evil, for Morrow, and so are thinkers who praise either. And so on. The book rises above this level occasionally, as in his portrait of several individuals who resist classification, and supports another conclusion: that we have to talk about evil. At other times, Morrow descends to the level of mere name-dropping, as in his portrayal of a Stockholm conference on international violence. One can extract from this book a reasonably favorable opinion of Morrow's thoughtfulness and personal ethics, but he does not offer much exploration in the direction of possible solutions, nor has he been rigorous in sifting his reflections for lucidity. Anybody who wants to keep up on impassioned screeds in pop ethics will find something to like here, but much religious thought on the matter, to take one example, goes undiscussed.