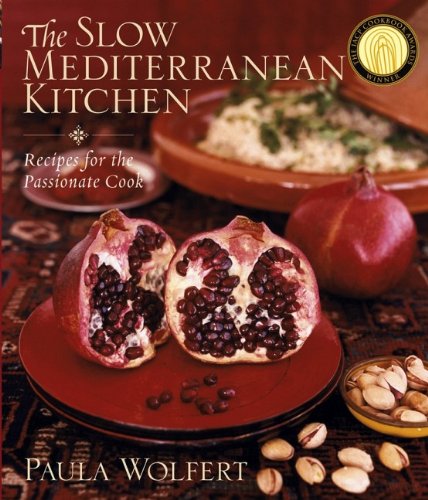 THE SLOW MEDITERRANEAN KITCHEN: Recipes for the Passionate Cook

Mediterranean cooking expert Wolfert invites readers to sit back and relax, in this, her eighth book (the first has been in print for 30 years)—a charming paean to the kinds of foods that require time to prepare, but are worth the wait. That doesn't mean these are complicated recipes. In fact, most are paragons of the simplicity and highlighting of flavors that have made Mediterranean cooking so popular. Dishes such as a classic Cassoulet use long periods in the oven to produce meltingly soft meat. The dough for Turkish Flatbread Stuffed with Melted Cheese needs to rise overnight, but is produced in a food processor with little effort. A chapter on soups celebrates simmer-it-and-forget-it dishes such as Turkish Red Lentil Soup with Paprika and Mint Sizzle and Mediterranean Marinated Fish Soup, which calls first for soaking fish filets in a mixture of Pernod, wine, thyme and garlic, then covering them with hot broth to cook off any residual rawness. Other recipes simply need to sit for their flavors to meld, as is the case with Cypriot Fresh Fava Bean and Purslane Salad and El Churrasco's Gazpacho with Pine Nuts and Currants. Wolfert does her usual practiced job of seeking out unusual flavors in all corners of the Mediterranean, such as a Butternut Squash and Potato Pie with Tomato, Mint, and Sheep's Milk Cheese from Crete, and providing interesting historical background, like the headnote for Seven-Hour Garlic Crowned Lamb, a recipe culled from a 1929 cookbook of the foods of France's Périgord region.