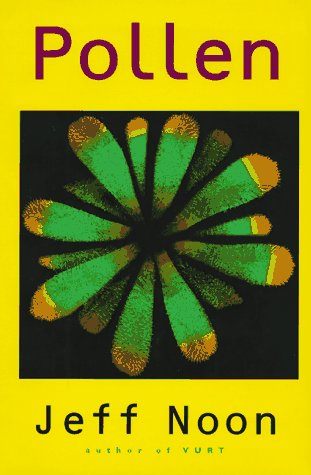 Again Noon plunges us into the psychedelic, near-future Manchester of his first novel, Vurt. In this city peopled by mutant crossbreeds (robodogs, dogboys, zombies), the barriers between reality and the Vurt--a kind of shared dreamworld accessed by tasting Vurt feathers--have been growing increasingly porous. It's now 15 years after the events of the first novel, and the denizens of the Vurt are engaged in a plot to invade the real world, starting by infecting the Manchester air with virtual pollen. Drifts of these yellow allergens fill the streets, causing a wave of death by sneezing. Only the ``Dodos,'' unable to access the Vurt because they don't dream, remain immune. One of them is the cab driver Boda, who begins by searching for the killer of her dogboy boyfriend, Coyote, and ends up confronting the leader of the invasion in his lair. Another Dodo is Boda's estranged mother, the shadowcop Sybil Jones, who narrates the novel in the present tense. Jones, who suspects that her police bosses are in league with the invaders, defies orders in an attempt to thwart the conspiracy. Noon brings to this sequel the same imaginative flair and gift for wildly mixed imagery that enlivened Vurt. In the book's latter half, however, the narrative threads start slipping through his fingers, just as they did in that novel. The properties of the Vurt and the pollen become ever more vague, while the author's use of hackneyed SF devices and plot elements becomes ever more distracting. Ultimately, Noon's B-novel plotting ends up muffling his colorful, quirky voice; while this book confirms his talent, he has a way to go before he gets it fully under control. (Feb.)
close
Details