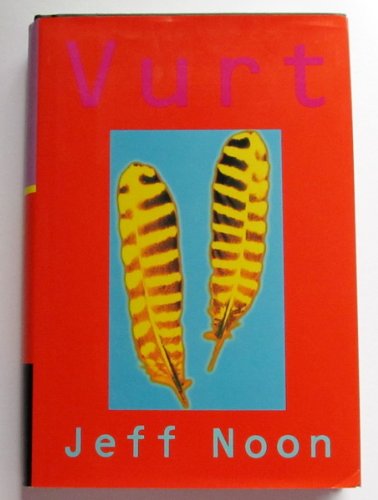 Noon's highly stylized, virtual-reality inspired first novel has won raves and the Arthur C. Clarke Award in Britain, eliciting comparisons to William Gibson, Anthony Burgess and Lewis Carroll, among others. But though it is original, vivid and powerful, it's not as revolutionary as the fanfare suggests. Noon gives us a future (or perhaps just other) Manchester, England, where nearly everyone is hooked on ``Vurts''-hallucinogenic designer drugs, administered with feathers, that send users into virtual worlds. Vurt isn't any old future drug, though; these worlds have a reality of their own. Users can meet up in them and share the experience, and they can even ``exchange'' objects or people and bring Vurt items back to the ``real'' world. Scribble, a member of a small gang of ``young hip malcontents,'' the Stash Riders, has lost his beloved sister, Desdemona (don't ask how beloved if you're shy about incest), to a black-market Vurt, getting in return a shapeless alien he dubs ``The Thing-from-Outer Space.'' Determined to find another copy of the ``English Voodoo'' Vurt in order to return and trade the Thing back for his sister, Scribble and his pals score illegal Vurts, run from the cops, fight among themselves, trip out on feathers, kill a cop, go to ground, become estranged and regroup. Some die, and all suffer, before Scribble gets his chance. Noon keeps a brisk pace, with the many Vurt-trip sequences, awash in Alice in Wonderland-like images, never so long or involved as to bog the story down. His bizarre, psychedelic future feels like no other, and the startling alloy of pseudoheroic genrespeak and neo-Beat freewheeling rhythms proves a unique and perfect medium for such a hallucinatory tale. There's little of Gibson or Burgess here, though. The story has neither the shock value of A Clockwork Orange nor the cyberpunk nihilism of Neuromancer. Noon takes his material (though not his characters) less seriously than Burgess, Gibson and most other SF writers. His future world isn't meant to be believable, or even cautionary, but merely colorful and engaging (which it is)-and that takes some of the bite out of the book. Nevertheless, this is an audacious fantasia, exhibiting a narrative daring and command few new writers can boast, sweeping the reader along as though it were a Vurt feather-trip itself. 75,000 first printing; major ad/promo; author tour. (Feb.)
close
Details