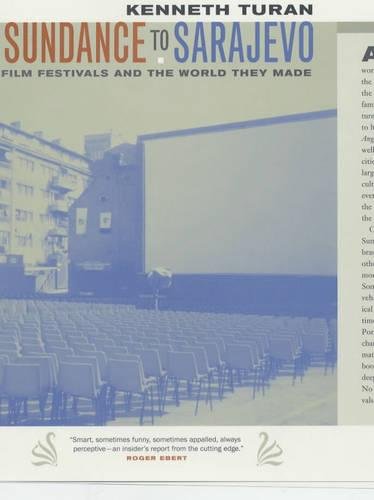 SUNDANCE TO SARAJEVO: Film Festivals and the World They Made

In this lively blend of travelogue and film history, film critic Turan details the inner workings of 12 of the world's 400-plus film festivals, capturing the essence of each. More broadly, he shows how festivals have become a "growth industry" providing filmmakers with an "an alternate p.r. universe" and fans a symposium on the "nature of the cinematic experience." For standard bearers like Sundance and Cannes, the thrust is, despite the hype, to uncover new films that surprise audiences and make "dreams come true" for filmmakers. Aesthetically driven festivals, like Italy's silents-only Pordenone, run on the commitment of organizers and patrons who believe in a given film genre or set of artistic tenets. But most indicative of film's life-affirming power are the festivals set in poor or war-torn lands, such as Burkina Faso or Bosnia-Herzegovina. There, organizers and audiences take many risks to ensure that a film is available, for to them it marks a "determination not to be alone in the world." Add to these aesthetic overviews Turan's well-observed social tableaux—the "pleasantly schizophrenic interaction between the minions of Hollywood and the scruffy independent world" of Sundance, the flashy yet "privileged look behind the scenes at the interlocking gears of the theatrical experience" at Vegas's ShoWest—and the film festival portraits are complete. Turan's easy erudition and wholehearted pleasure in the film experience infuse the book, making it, like a good movie, a multilayered delight. B&w photos not seen by .

The Variety Guide to Film Festivals