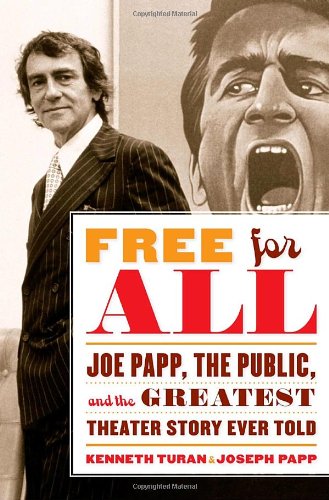 Free for All: Joe Papp, the Public, and the Greatest Theater Story Ever Told

Turan, now the film critic for the , was approached by theatrical producer Joe Papp in the 1980s to develop an oral history of the New York Shakespeare Festival and the Public Theater, then blocked the book from publication after reading an early draft. Years later, we can understand some of Papp's reluctance: former colleagues speak frankly about his failure to share credit for success with others, and why the effort to move his radical style of theater into Lincoln Center met with failure. Papp's personality can be prickly, to say the least; one of his first reactions to a surprise birthday party thrown by his staff was to wonder what else they could be doing behind his back. But stories like this, or accounts of the backstage turbulence on plays like or , never overshadow Papp's creative legacy and his engagement with New York City's diverse society. As dozens of actors, from the late George C. Scott and Anthony Quinn to Meryl Streep and Kevin Kline, share their memories, it's easy to see how the constantly hustling Papp became “larger than life just by being himself.”