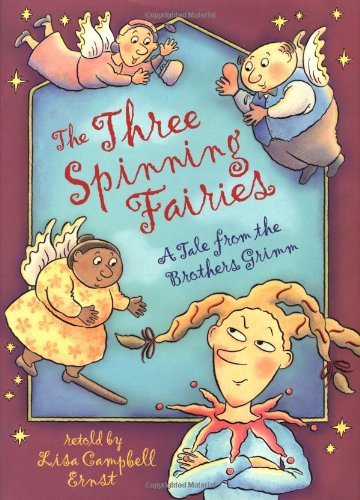 THE THREE SPINNING FAIRIES: A Tale from the Brothers Grimm

Ernst's () wry text and busy pictures contribute equally to the humor of this rollicking retelling. Sporting three pigtails that stick straight up from her head, Zelda, daughter of the Royal Baker, looks every bit as foolish as she is made out to be. Since she "fancied herself too special for work of any kind," the girl loafs around while her mother frantically bakes for the fussy queen. In an attempt to hide her daughter's slothfulness, the mother tells the queen that Zelda is such a hard worker that she refuses to stop spinning yarn. Delighted, the royal brings her to a tower, announcing that Zelda can marry the prince as soon as she finishes spinning the flax that fills the tower's three rooms. Enter the title characters, who up to this point have been hovering watchfully from outside the frames of the illustrations. With physical abnormalities that enable them to spin masterfully, fairies Anita, Benita and Bob (the last a paunchy bald man in a vest and bow tie) cheerfully complete Zelda's task. Ernst cleverly capitalizes on the story's inherent ironies as she reveals how her colorful characters get their just deserts—especially Zelda, who inherits her mother's demanding job. A felicitously fractured fairy tale. Ages 4-8.