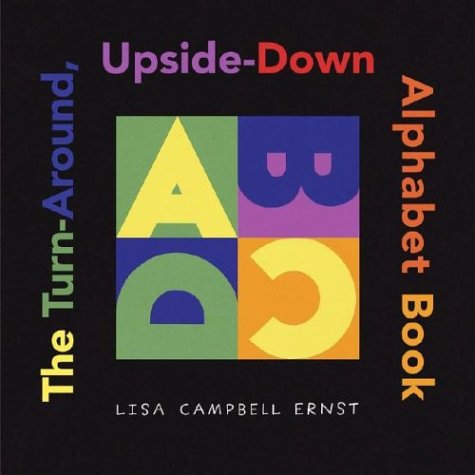 Many alphabet books transform the 26 letters into people, places or things; Ernst ( ), however, gives the idea a new twist—literally—by asking readers to rotate her exuberant book 360 degrees, to view each letter from four different perspectives. Working with cut paper, Ernst sets each blocky, sans serif, capital letter against a square field of fluorescent color; in the black border that frames the letters, the text encourages readers to examine the image from each of four angles (as it wraps around the page): "C pretends to be/ an angel's halo" (as readers turn the book to view the letter, bright yellow on an orange background, positioned so that its curve points up), "macaroni and cheese" (the upside-down "C") and a hoop earring (when it rests on its curve)." Not all the suggestions are compelling—O, for example, resembles a bagel no matter how one looks at it—and some youngsters may need coaxing to notice the conceits that depend on the interplay between the letter shape and its negative space (a lime-green N turned on its side looks like "two tortilla chips headed for guacamole" because the angled lines of the letter create two triangles from the yellow field). But children who are mastering both letter recognition and the mechanics of book-reading should get a kick out of how Ernst rewards them for tweaking the rules. Ages 3-6.