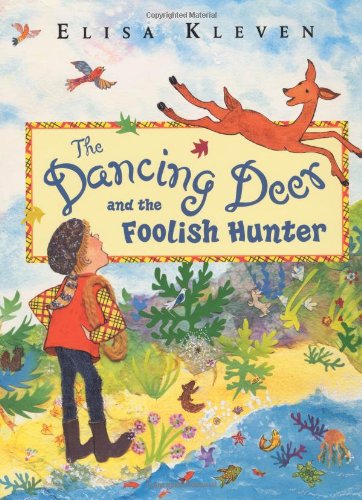 THE DANCING DEER AND THE FOOLISH HUNTER

In Kleven's () relatively lengthy tale about the interconnectedness of all living things, an opportunistic hunter discovers that he can neither take the deer out of the woods nor the woods out of the deer. When the hunter spies a deer joyfully dancing in the forest, he's sure he has stumbled upon a moneymaking miracle. But once he lassoes the creature and takes her to his house, the deer doesn't seem so miraculous. "To dance, I need the sweet singing of birds," the deer explains. Netting some birds and bringing them indoors to accompany the deer doesn't work either. "To sing, they need the pine trees whistling along with them," according to the deer. After several other failed attempts to simulate the great outdoors in his living room, the hunter returns all the animals, plants and elements to their habitats—and gets a dancing lesson as thanks. More narrative in style than some of her other work, Kleven's mixed-media compositions vary between framed, slightly static scenes and images that swirl and sway through the text like the light-footed doe. Particularly nifty collage elements include marbled paper birds' wings and, for the buildings in the hunter's town, scraps from newspapers and advertisements. Kleven's signature kaleidoscopic blend of color and texture and her respect-for-nature theme never disappoint. Ages 4-7.