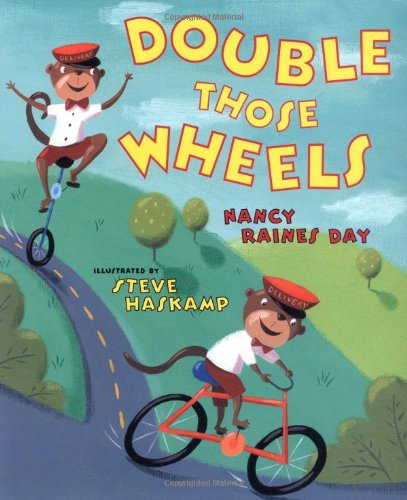 In Day's () charming, rhyming romp, a monkey sets off on a unicycle to his job delivering pizzas, and encounters a series of mishaps—each of which compel him to change his mode of transport by doubling his wheels. The catchy verse propels the story along: "Chug, chug. Putt, putt./ Can't be late!/ Double those wheels/ and you've got.../ eight!" Haskamp's () paintings—some spot illustrations, others full-bleed pages or spreads—depict the monkey's dedication to getting the pizza to its destination. His delivery car breaks down, and a tow truck appears (that makes the eight); when it runs out of gas, he hitches a ride with a 16-wheeler. Finally, it's a hot-air balloon that gets the pizza, still piping hot, to a child's birthday party. Painted in broad brushstrokes on textured canvas, Haskamp's lively, candy-colored illustrations subtly weave in and enhance mathematical concepts (the 32-wheel spread is especially inspired: the truck itself rides on only 12 wheels, but it transports five cars), while in the text itself, the numeral and the spelled-out number appear together. Haskamp also incorporates identifiable patterns and shapes, many of which—bananas, trees, buildings, balloons—cry out to be counted. Whether admiring the ingenuity of the monkey, memorizing the snappy rhymes or mastering a new math concept, children will find this book a joy. Ages 3-6.