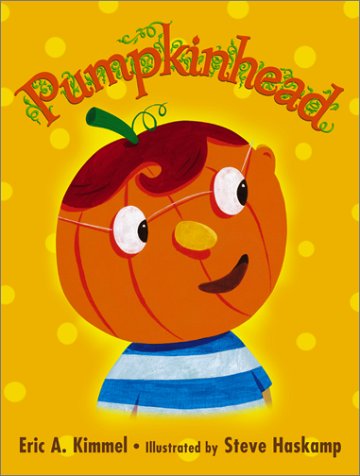 In this offering, the title character asks his mother if everyone in the world has a pumpkin for a head, as he and all the other residents of Pumpkintown do. She replies, in flat and repetitive language typical of the tale, that "Nobody in Pumpkintown has ever gone anywhere else. Nobody from anywhere else has ever come to Pumpkintown. No one really knows whether or not other people have pumpkin heads. It's a mystery." In an attempt to solve it, Pumpkinhead first checks the library (but the entire collection focuses on Pumpkintown), then follows the road out of town. When he stops to take a nap, he removes his head and faces it in the direction in which he was walking so that he'll know which way to go when he awakens. But a pair of mischievous squirrels see to it that he ends up back in Pumpkintown (which he doesn't recognize as his hometown) and repeat the prank on the return trip. Pumpkinhead once again lands at home to report his discovery to his fellow townsfolk, who conclude, "There's no need for any of us to go anywhere again." Though Haskamp's () quirky acrylic artwork offers some kid-pleasingly silly images, the volume's attempt at drollery misses its mark. Ages 4-8.