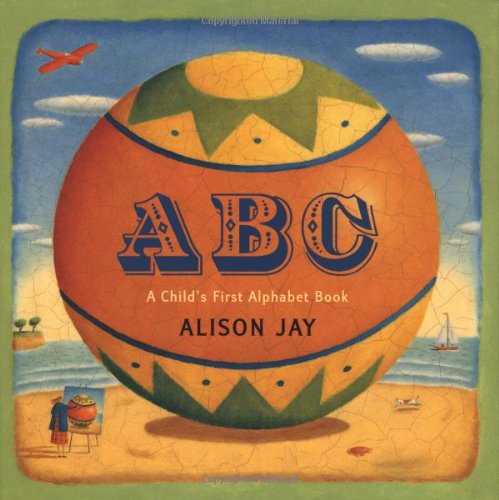 Fans of Jay's will recognize a few familiar encore performances and appreciate her deceptively simple approach to this visual alphabet book. Once again, Jay previews an element in each painting that will appear in the next, and her porcelain-like, finely etched lines suggest an antique canvas. The minimal text cites one item per letter (next to a capital and lower case "Aa" appear the words "a is for apple"), and most illustrations include other objects that begin with the same letter (the candy-red airplane from , an ant), as well as an item beginning with the next (a balloon appears in the upper right-hand corner of the "Aa" illustration, to be featured in the "Bb" painting on the next page; cows graze in the lower left-hand picture of the "Bb" painting before one takes center stage for the next scene, as it jumps over a crescent moon). Animal images abound, most rendered in a primitive style that tweaks traditional proportion. In several instances, Jay frames her images inventively: a picture of an equestrian accompanying the phrase "h is for horse" is nestled inside of a horseshoe (the rider holds an ice cream cone, to be featured in the next illustration); and for "Kk," readers look through a "keyhole" to view the equestrian's bedroom, her cap on her bureau, a koala atop her dresser, a kangaroo on a chair). This volume will likely offer as much to folk art aficionados as to children in the targeted audience. Ages 1-4.