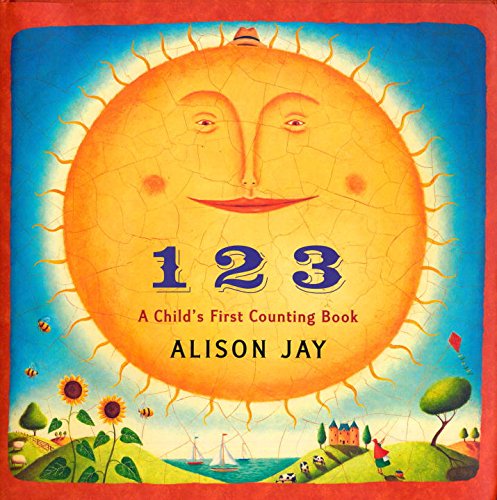 In a sumptuous companion to her C, Jay takes readers on an enchanted journey from 1 to 10 and back again, with help from fairy tale figures. A quartet of self-satisfied frog princes impressively embody the number 4, while a plate of gingerbread men—including one poised for escape—represent the number 6. (Other counting opportunities abound in the backgrounds.) As in the previous book, Jay unspools a story-within-the-primer. “One little girl,” who has fallen asleep while reading, is transported to the magical landscape on the wings of the Goose That Laid the Golden Egg; this same bird serves as her chaperone as she visits the subsequent scenes as an amazed onlooker. At number 9, the goose is reunited with her precious-metal eggs, and the girl finds herself cast as Little Red Riding Hood and other heroines as the numbers reach 10 and head back to 1. Close attention will reveal other links; for example, the view of Jack's beanstalk (created from seven magic beans) also includes one of the eight rats who figure prominently in the following spread, inspired by the Pied Piper of Hamelin. The pictures are a wonder to behold: Jay's flattened perspectives, gently faded colors, crackle-glaze finishes and lean, angular characterizations vaguely evoke the dreamy, ambiguous narrative qualities of medieval art. And yet the pictures never feel like museum pieces—rather, they're like missives from a universe where it's Once Upon a Time 24/7. Ages 3-up.