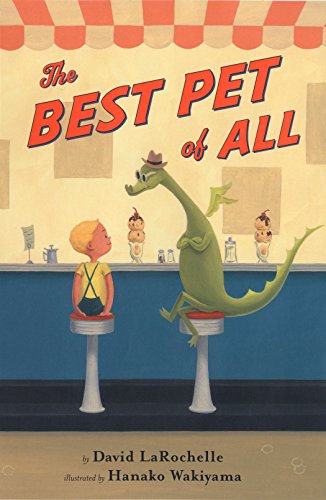 THE BEST PET OF ALL

LaRochelle's (the Mad Mysteries series) comic timing and Wakiyama's ( ) retro art add sparkle to this witty variation on a universal theme, the child who wants a dog. Tired of his mother's refusals of his repeated requests for a dog, the towheaded narrator changes his tactic and asks instead for a dragon. "If you can find a dragon, you can keep it for a pet," she replies. After some searching, the boy locates a dragon at the drugstore, reading a magazine, but it takes some hard bargaining before the dragon agrees to come home with him. It turns out, however, that dragons wreak havoc: "They roast hot dogs in the living room" (the illustration shows the creature reclining in a wingback chair, breathing fire), and they dance to loud music all night (the scaly pet spins records on a turntable and strings paper lanterns from the ceiling). The nostalgic settings of Wakiyama's vignettes and spreads, which introduce old-fashioned soda counters and beach-bathing girls who could double for the Coppertone model, accentuate the naughty goings-on by the implied contrast. Kids will cheer the clever young narrator's solution to the problem—which nets him the dog he longed for—and will relish the image of boy and dragon exchanging an in-cahoots thumbs-up over the garden wall as the mother lovingly tends to the dog. A fresh, fun frolic. Ages 5-up.