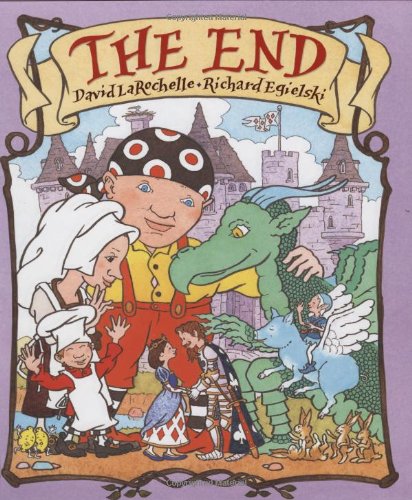 This reverse fairy tale begins with a wedding, a regal cast of fantasy characters and a parchment-colored banner with the requisite words "And they all lived happily ever after." Readers inevitably wonder how this happy ending came to be. Never fear: LaRochelle ( ) and Egielski ( ) provide a second banner that heralds, "They lived happily ever after because...," leading to a scene of "the soggy knight" holding hands with the lovestruck princess. But how did the knight get soggy? And why are two giants, eleven rabbits and a scaly green dragon at the door? Subsequent "because..." pages reveal, in backwards order, the events that led to "The End." When readers finally arrive at the title page, wordless endpapers show the lonesome princess in her garden. Readers then can rewind from back to front, to discover the machinations of an elfin cupid and his winged blue pig, who set the mischief in motion. LaRochelle keeps the plot simple, the better to trace the inverted order, and leaves the excitement (the dragon's fiery snort, the giant's temper tantrum, etc.) to the intertwining images. Egielski illustrates in buoyant hues of royal blue, scarlet, daffodil yellow and white, framing each spread with a knobby brown vine motif. He alludes to a deck of cards and to Caldecott's with the diamonds and clubs on the royal wardrobes, and he gives timely visual hints to past and future moments in this nicely realized puzzle. Ages 4-8.